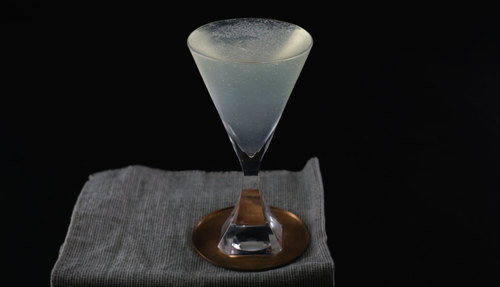 The history of the airmail has been rewritten over the last five years. In 2007, David Wondrich—one of the world’s premier cocktail historians—wrote that the drink was published in the 1949 Esquire book handbook for hosts. Coincidentally, he wrote those words for Esquire but that is really neither here nor there. He added a few additional notes about the clever name, which referenced the air mail system that was both popular and futuristic for the time, and that was that. Fast forward to 2015, when Douglas Ford pens an excellent piece on the airmail, claiming that it actually came from a 1930’s Bacardi promotional pamphlet published in Cuba. He added that the date and time rationally explains the cocktail’s name, since Cuba had just added an air mail system in 1930. This really blew our tops, because we had always thought of the airmail as a 50s drink from the United States. We searched high and low, both through the amazing vintage cuban cocktail books online catalog, as well as our own collection, but turned up nothing. Ultimately, it wasn’t a eureka page flip, but a desperate google image search that led us to the source; published in 2011, this interview with Cocktail Kingdom founder and avid Cuban pamphlet hoarder Greg Boehm seems to hold the key:

“The Air Mail cocktail is originally from a Bacardi booklet. With the Air Mail a lot of people are like, “Oh, it’s from here, it’s from there,” but by far the oldest I’ve gotten it back is in a Bacardi booklet. Now, I’ve never come across any literature from the liquor companies saying outright, “We created this,” or claiming direct authorship of these cocktails, but certainly their first printed appearance is in the booklets. Of course, you never know who really made those booklets. That’s always a source of frustration.”

A second interview in 2012 for Umami Mart reinforces this claim, along with the 1930’s timestamp, though you might need to go by his office for physical validation since we haven’t been able to track down an actual image of the book. As for us, we’re willing to buy into the claim. The date makes way more sense for a French 75 variation, and quite frankly, 1949 seems way too late for such a simple and delectable riff to be discovered. The airmail has all of the excellent qualities of a French 75. It is impeccably light and delicate, with the flavors of champagne acting as the strongest in the drink. The lime juice really hangs back, and the light rum takes it easy as well. It might be the ultimate brunch cocktail, as well as one of the few cocktails we would recommend with a meal, since its extra-delicate approach won’t blow your palette.

The airmail is scary drinkable. To paraphrase David Wondrich: “It’ll get you from point A to point B in a hurry.” The nose is all fruit from the lime and sparkling. The body is impeccably crisp and refreshing, with a wine-dominant start and light notes of rum lingering after the sip. Because of its simple and clean style, the airmail makes for a great opportunity to experiment with more complex sparkling wines. The flavors will come through; just make sure to alter the amount of simple syrup accordingly.