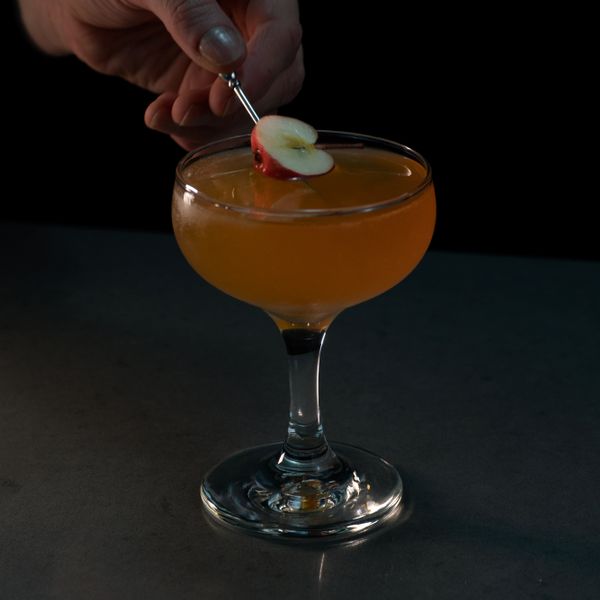 Along with drinks like the Doctor Cocktail, this oddly named drink is one of a few classic cocktails most associated with the long lost spiced Nordic liqueur, Swedish Punsch. Credited with the creation of this combination of apple brandy, Swedish punsch, and grapefruit juice; bartender Robert Vermiere included the Diki-Diki in his 1922 book Cocktails: How to Mix Them, mentioning that he introduced the cocktail at London’s Embassy Club that same year. Just one year later, Harry McElhone included a stiffer version of this drink (4:1:1 as opposed to 2:1:1) in his ABC of Mixing Cocktails, noting its great popularity in London. While it predates the movement, its name seems right at home in the world of tiki where it was embraced by Trader Vic and is now often served alongside other oddly named drinks with questionable etymology and origin stories. It could be considered what one might call proto-tiki.

We borrowed this recipe from Vintage Spirits and Forgotten Cocktails, which is a slight modification of Vermiere’s original ratio. This drink really delivers the essence of apple, it smells like apples and it tastes like apples. There are some funky ingredients blended here alongside the fleshy apple brandy, but they all seem to find a way to support the apple. The nose delivers hints of vanilla and sugarcane from the rummy Swedish punsch. On the tongue it’s fleshy and apply, with a finish of heat from the strong booze. Sweetness and spice from the punsch and acidity from grapefruit punch up the apple flavor, resulting in an impressively balanced drink that’s reminiscent of a more complex Jack Rose.

Kronan Swedish Punsch seems to be the only product available in the US right now. You can make it yourself if you feel inspired: David Wondrich provides a recipe in his Punch. While many recipes call specifically for Calvados, you don’t have to use Calvados, there are many other apple brandies. If you do, we have had great success with Domaine de Manoir Du Montreuil Calvados Du Pays D'auge Reserve. The first time we tried this, we made it with AppleJack instead of calvados and it was awesome. Applejack does have the tendency to take over a drink more than calvados does with an intense pure apple flavor. It ultimately will come down to what you want out of the drink, but definitely don’t shy away from it.