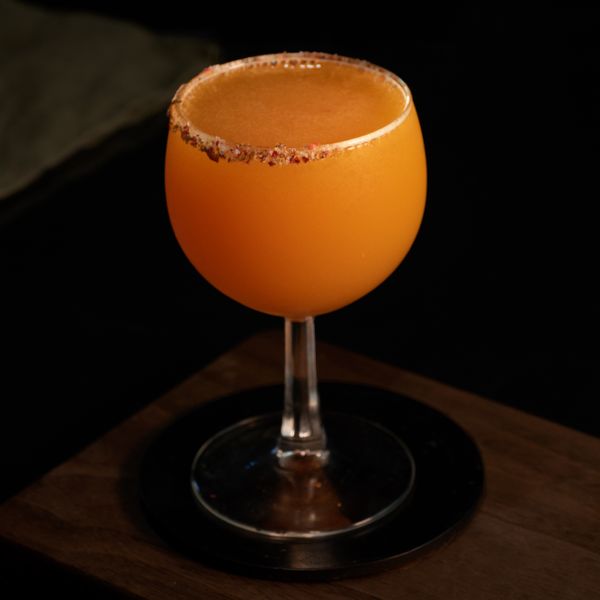 Our friend Martin runs a wonderful and weird instagram that features retro recipes from midwestern community cookbooks. Items like “ice cream salad” and “potato chip cookies” are available for folks who might seek culinary adventure in that out-of-the-box kind of way inextricably associated with the 1950s. So it should come without surprise that when Martin requested a cocktail recipe from us, it would contain at least one ingredient that doesn’t belong in a mixed drink. Luckily the request, which was for carrot, was not completely out of the realm of sanity. In fact, carrot has become a bit of a trendy ingredient of late, and it was nice to finally explore the subject. Carrot juice is available at grocery stores of almost any size and—with its reasonable sugar content and beautifully vibrant hue—makes for a surprisingly effective mixer. Serendipitously, while perusing the pages of Mezcal by Emma Janzen we found this little ditty.

While carrot juice might represent the biggest name on this billing, the show-stealer in this recipe is ground pink peppercorn: this offbeat ingredient adds a peppery and smoky flavor that pairs perfectly with the earthy-sweet flavor of carrot. Combined with mezcal and lime, the drink begins to look like a smart, short, and sophisticated version of a tequila bloody mary. Whip this drink out for brunch or whenever something salty, smoky, and savory is on the docket. Or reach for this drink when you’ve got some carrot juice and don’t know what to do with it. The beautiful orange hue contrasts with the speckled pink peppercorn for a show stopping appearance that will turn heads in almost any environment.

When preparing for this drink, choose a mezcal with a salty and savory profile. We love the Mezcal Vago family and their Elote is a perfect fit. The original recipe requests only pink peppercorn on the rim, but we prefer a blend of pink peppercorn and sea salt. Take both of them and process in a spice grinder before applying to the rim. This will help knock the intensity of the pepper back a little bit and highlights the pink (rather than the less appealing brown) elements of the spice. We found that the cinnamon syrup didn’t come through with a lot of strength; if this flavor note is of particular interest, consider adding cinnamon to the rim or making a stronger syrup.