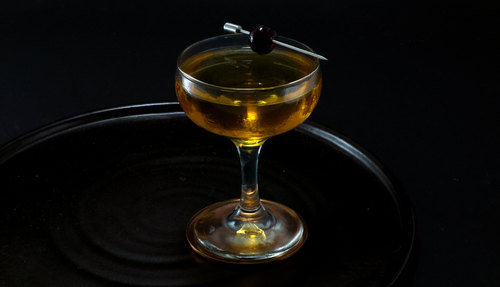 First printed in George Kappeler’s 1895 book Modern American Drinks, the widow’s kiss likely gained full dissemination via the 1900 edition of Harry Johnson’s famous Bartenders Manual. Ted Haigh, who wrote a beautiful piece about the drink in his book Vintage Spirits and Forgotten Cocktails, thinks Kappeler probably invented the drink too. Haigh also takes some time to gush a smidge: “It is a cocktail of fall turning toward winter, and it wins Doc’s award as the most evocative drink ever.” Most evocative drink ever? That’s quite a compliment, especially coming from a dude who published a drink manual in a freaking three-ring binder.

While we can’t fully indulge in Haigh’s hyperbolic proclamations, we must admit: the widow’s kiss is an exceptional drink, and a remarkable specimen in the late 1800’s canon. Herbal liqueurs were all the rage then, as were ratios that emphasized them. True to the spirit of the age, this cocktail buries its base spirit like an outlaw with a sack of gold. The combination of Yellow Chartreuse and Benedictine make for a flavor profile so immovably herbaceous, a wandering nose might mistake it for a cup of gin. During the sip, however, the apple brandy comes through, and gives the drink a dry spiciness and perfect cool-weather edge. We also disagree a bit with Haigh’s seasonal placement: the widow’s kiss is great for early fall too. It is not particularly heavy on cinnamon or clove, and displays a light, glowing amber tone reminiscent of apple cider.

We like this drink a lot with Clear Creek apple brandy, which has a dryer character and beefy apple flavor that cuts through the herbal notes nicely. Overall, we wouldn’t mess with this one a whole lot. It could be made with Green Chartreuse, but tread with caution—the drink already tastes like being popped in the face by monk power—using the more intense variety might be overkill. At the very least, we would probably knock off a quarter ounce, to keep things balanced. While there isn’t much tinkering to do here, bitters might be a good place to start. Apple or pear bitters would be especially good. Stir this drink for at least a half-minute, to infuse plenty of water into the drink and tame the intense ingredients. Garnish with a cherry if you’ve got one.