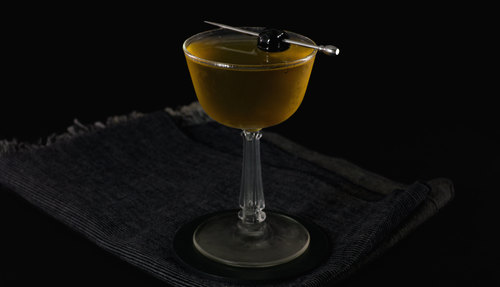 Created at the Lord Baltimore Hotel, the diamondback is not named after the snake, but instead the cute little turtles—also known as terrapins—that frequent Maryland’s waters and inspired one of college athletics' least intimidating mascots. Most writers cite Ted Sauciers 1952 book Bottoms Up as the first place the cocktail was published, though we haven’t been able to track down the year it hit the hotel bar menu. The diamondback is fairly well written about, and most pieces mention how strong the drink is. This is true, though the name might bias things a bit: it isn’t much stronger than similar classics like the widows kiss, Alaska, and Monte Carlo. More importantly, the diamondback is a stellar spirit-forward classic: perfect for moments when something timeless yet unexpected is appropriate. The drink is boozy and nocturnal, with a subtle air of luxury. It has a honey-sweet quality from the Yellow Chartreuse and a spiciness from the rye with hints of fruity apple poking through. It finishes with a bit of heat, and the Chartreuse lingers for a while afterwards. The drink is amazingly balanced given how much Chartreuse is used, and every ingredient plays an important role.

It is common for bartenders to beef up the diamondback in several ways. A high-proof rye is often employed: a move we can emphatically endorse. We love high-proof Rittenhouse in all sorts of cocktails, and this one is no exception. Some like Green Chartreuse in this drink, which also makes some sense: it stands up better to rye, and also helps differentiate the drink from the very similar and more famous widow’s kiss. Green Chartreuse is almost always a good look, but here the apple notes begin to disappear under all that complexity. Because of this, we stick to the yellow variety. If you are feeling particularly wily, close both eyes and swap in a blended scotch. We can’t officially endorse such reckless behavior, but suffice to say: it has entered our glass once only by accident, but will probably return. While the original recipe does not request a garnish, good brandied cherries are always welcome in recipes like this; the subtle cherry scents won’t interfere with the bold nose, and every drink looks better with a little something on top.