A San Francisco original, and an exceptional coffee-laced riff on the Manhattan 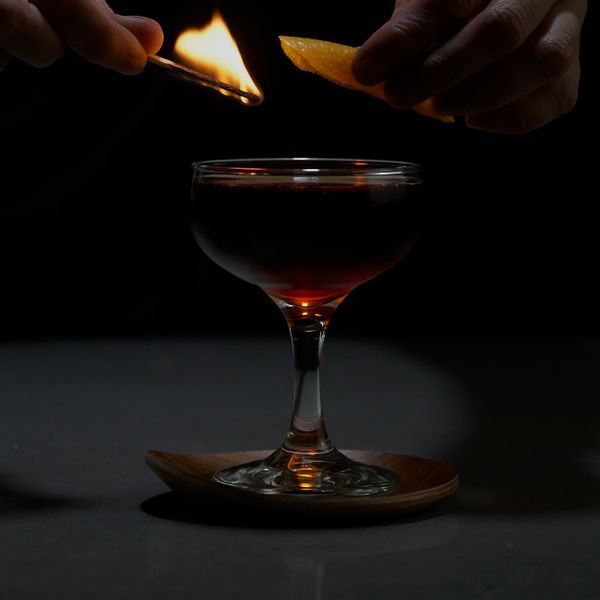 Created by legendary Bay Area bartender Jon Santer, the Revolver built a reputation as a flashy fan-favorite at popular San Francisco bar Bourbon and Branch. The flaming of the orange peel caught eyes, as did the spicy coffee profile, which undoubtedly benefited from the third wave coffee movement sweeping the west coast. In his excellent 2014 publication The Bar Book, Jefferey Morgenthaler details his history with the drink; he first learned about the recipe at his New York bar from a well-traveled patron, as the drink was gaining popularity on the west coast mostly by word of mouth. Morganthaler’s decision to include it in The Bar Book, as well as Robert Simonson’s selection a few years later in Three Ingredient Cocktails, has undoubtedly pushed the cocktail to a wider audience and borderline modern-classic status.

The name of this drink is a play on the base spirit that inspired it: Bulleit bourbon, which became more widely distributed around the turn of the Millenium. Bulleit makes sense in this drink, as the spicy profile matches up nicely with the coffee flavors, though the smoother scent—more typical of bourbon—hangs back enough to let the coffee and orange notes come through where they matter most. Coffee and whiskey are a nice pair, and certainly this combo jumps off the page when skimming the recipe, but what really surprises here is how nicely the orange and coffee work together. This combination of fruit and coffee elevates the drink alongside more famous kinfolk in the Manhattan family, such as the Black Manhattan and Toronto.

Many versions of this recipe call specifically for Bulleit bourbon, which makes sense because of the drink’s name and history. Morganthaler is more open-minded, only requesting a dry, spicy bourbon. We tend to lean in this direction, as we’ve tried this drink with a few varieties and it was still pretty delicious. Knob Creek bourbon 100, in particular, delivered a nice finish, though the coffee nose was more subdued.

Given the drier, spicier varieties requested, a thoughtfully chosen rye would probably work too. Most books are noncommittal about the type of coffee liqueur to use. We highly recommend a more sophisticated offering like Mr. Black for this drink, as the short ingredient list and spirit-forward profile place extra weight on each choice. This drink originally gained traction because of the showstopping flaming of the orange. Flaming an orange peel takes a lot of practice, as the oils need to be perfectly expressed at the right time. That said, sticking a match to one is pretty easy, and offers virtually identical flavor.

Follow
Similar to: Revolver
And To All A Goodnight
bourbon, reposado tequila, heering