A classic known for it's amazing name and mediocre taste 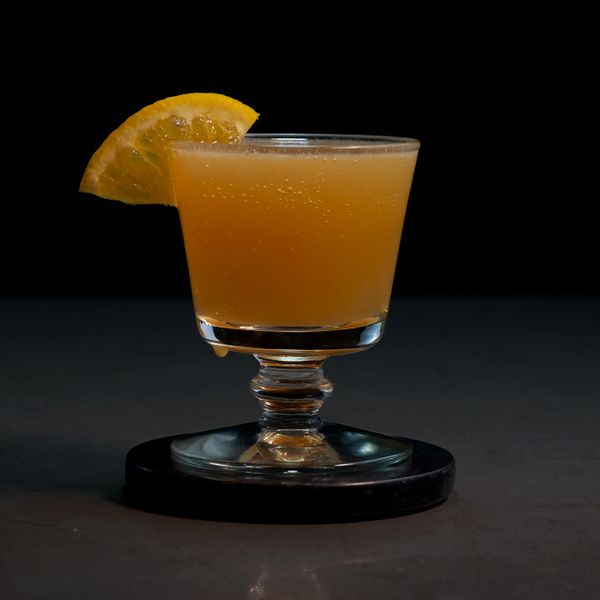 Many themes surrounding innovation, industry, and culture have captured the imagination of bartenders; take for example the 20th Century or Blood and Sand. In this case, it is medicine that lent inspiration, as the monkey gland was named in honor of a procedure that gained quite a bit of attention in the 1920s. Pioneered by Dr. Serge Voronoff, the process involved transplanting a monkey's sexual gland tissue into humans, and carried the promise of “rejuvenation” in the form of youthful energy, prolonged life, and other various health claims. An increase in sexual ability was also implied, and undoubtedly a focus of interest. The practice of inserting monkey glands into millionaires' bodies fascinated the public, and references to the technique crept into popular culture—from film, to literature, to beverage culture—and resulted in this drink, which was created by bartender Harry McElhone in Paris. The drink was a hit among his bar patrons, who were often American expats. In his Vintage Spirits and Forgotten Cocktails, Ted Haigh goes so far as to label the monkey gland as the “cocktail most associated with Prohibition”.

A simple mix of gin, orange, grenadine, and absinthe , this drink delivers a beautiful candy-orange color. However, the monkey gland has a bit of a reputation taste-wise: the ingredients don’t quite work together, and our experience with the drink was roughly the same. Anise and orange are odd bedfellows and it feels as though the absinthe never quite fits in with the other ingredients. The nose is full of orange and absinthe, followed by a fruity and herbal sip. The mixture results in a sweet tart flavor, almost candy like, with a juniper finish. It has the same overall roundness as other orange juice based drinks, such as the income tax or Blood and Sand, and the absinthe does shine in providing a sharpness that cuts through the roundness, which is a nice touch.

The drink is often mixed one of two ways: equal parts gin and orange juice (the classic ratio) or 2:1, which has become popular over time. Our tastes tend toward the modern, although the 1:1 ratio seems to more successfully smooth out the absinthe bumps. Some recipes use Benedictine in place of absinthe, likely from a little ingenuity during periods of absinthe unavailability. This does suit some tastes better, so it is worth trying. We understand why recipes call for a specific type of gin—this funky drink can definitely hinge on the variety selected. Many recipes recommend Plymouth gin for this—a directive we didn’t follow, but that could be good advice to adhere to, although in general a dry gin is what you want here. As always, use fresh orange juice. Some recipes suggest no garnish, which is fine, but we like a nice orange wedge on the rim for presentation.